How To Practice Guitar

How To Practice Guitar 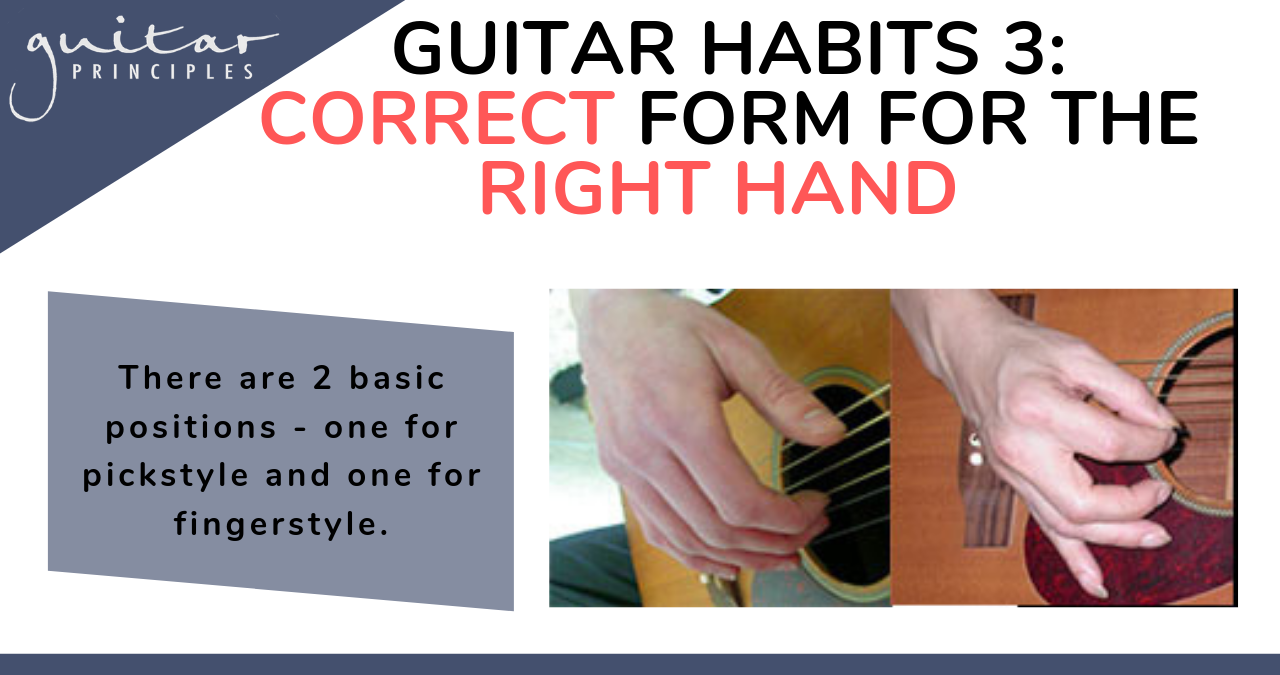 Posted in  How To Practice Guitar by Jamie Andreas,
Share0

The 2 Right Hand Positions On Guitar

Here are the basic characteristics of each position...

1. The fingers are almost perpendicular to the strings, pointing down toward the floor and cupped as if holding a ball .

2. The thumb is out and away from the fingers.

3. The wrist is slightly arched, with a space between the wrist and the guitar.

4. The hand is bent down slightly at the wrist.

1. The arm, wrist and hand is flat to the face of the guitar.

2. The arm, wrist and hand are in a straight line.

3. The pick is held between the thumb and index finger.

4. The fingers not holding the pick are held out. The pinky can lightly touch the face of the guitar.

Similar to the 2 basic positions for the left hand on guitar, there are 2 basic fingerstyle positions commonly used on guitar. They could go by many names, but we will call the first one the "classical" position, and the second the folk/country position. The folk/country position is used in styles where damping the bass strings is an essential characteristic of the style. It is often done with a thumbpick.

1. The arm is placed on top of the bout of the guitar.

2. The wrist is away from the face of the guitar, forming a downward arch.

3. The fingers come across the strings in a mostly perpendicular angle to the strings

1. The arm is placed in front of the guitar.

2. The arm, wrist and hand is flat to the face of the guitar.

3. The fingers come across the strings in a more parallel angle to the strings than perpendicular.

If the student starts with the folk/country position it is much more likely that tension habits will dominate the technique. It is very difficult for most students to be relaxed in this position and still handle the left hand movements of their music

However, the student who learns the classical position first has no problem learning the folk/country position. It is easy to switch back and forth in the same piece of music if desired.

Students are always asking me "If I learn the classical right hand position for my right hand as you teach in "The Principles" will I still be able to use the folk/country position and mute bass notes".

In this video, I provide the answer. Watch me begin with the "classical" position and then switch to the "folk/country".

1. The arm is placed in front of the guitar.

2. The arm, wrist and hand is flat to the face of the guitar.

3. The arm, wrist and hand are in a straight line.

How To Position The Right Arm & Hand

In this video I show you how to position the right hand and arm for both fingerstyle (classical position) and pickstyle.

Next: The Cycle Of The Note

"How To Practice Guitar"

The Cycle Of The Note

The 3 Levels of Guitar Practice

How To Do Correct Practice On Guitar: No Tempo Practice

What You Must Do To Practice Guitar Effectively

What You Must Know To Practice Guitar Effectively

Jamie Andreas has one goal: to make sure that everyone who wants to learn guitar is successful. After her first 25 years of teaching, she wrote the world acclaimed method for guitar "The Principles of Correct Practice For Guitar". She put everything into this method that was essential for success on guitar. Called "The Holy Grail" of guitar books, the Principles has enabled thousands of students who tried and failed to play guitar for years or even decades, to become real guitar players. In 2012 Jamie was profiled in "Guitar Zero" (Penguin Press 2012), a study of how adults learn to play guitar. Jamie was interviewed along with some of the worlds leading guitarist/teachers, including jazz legend Pat Martino and Tom Morello ("Rage Against The Machine").